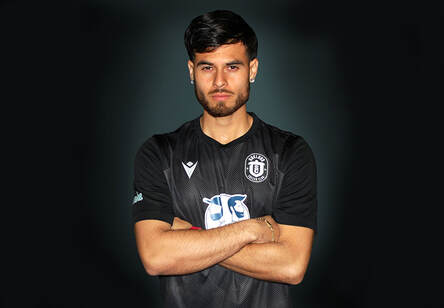 Long time Oakland native and success story, Julio Cervantes was born in Guadalajara Jalisco, México in 1993. Cervantes, along with his family, immigrated to Oakland California in 1995. After his family established in Oakland, he then attended OUSD Schools, such as International Community School, Urban Promise Academy, and Fremont High School. After Julio graduated from Fremont High School he went on to attend Merritt College and then transfer into University of the Pacific where he graduated in 2016 with a Sports Pedagogy Major. From growing up in Oakland and having to move out to achieve his college goals, Julio considers Oakland to be his home and there is no other place he would rather be in.

Cervantes began his soccer career at the age of 12 as he played for Urban Promise Academy’s soccer team. Since then, Julio continued to play for local teams such as Bayoaks, San Jose Earthquakes Academy, SJ Earthquakes Reserve team, and SJ Earthquakes U-23, El Farolito, Aguiluchos, Merritt College, Burlingame Dragons, BayCities, Oakland Soccer Club, and Oakland Roots SC as they first debuted on the National Independent Soccer Association (NISA) in the fall of 2019. Julio also played three years for the Tigers at University of the Pacific, where in his senior year he scored 11 goals in 19 appearances. Some of his outstanding accomplishments include; Men's First Team All conference 2016, Tom Flores Outstanding Athlete of the Year, Mens Offensive MVP, and NSCAA ALL Region Team. Through his playing trajectory Julio experienced different challenges in all the clubs but above all, Julio always looked forward to morning training on the moist grass fields and game days.

Cervantes began to play for Oakland Soccer Club’s First Team a little over a year ago which will be playing in the prestigious National Premier Soccer League (NPSL). He took part in the success of leading OSC as 2021 San Francisco Soccer Football League (SFSFL) Premier Division Champions! Since then he has enjoyed the culture, and coaching staff who have made him feel valued and part of the organization. His love for the game led him to take the Director of Coaching position with OSC as he enjoys teaching and sharing his knowledge to younger generations with similar backgrounds as him. Julio wants to bring his experience on and off the field to bring Top Youth Soccer in his community and more importantly in the neighborhood he grew up in. OSC wants to harness and develop youth players with the help of Julio creating a bridge between the youth teams and the First Team. They know the youth have a lot of talent and with the right guidance they can go far on and off the field.
​About Oakland Soccer Club: Since 1974 Oakland Soccer Club has provided affordable, high-quality opportunities for underserved youth in Oakland to develop skills for soccer, school, and life. Our goal is to remove the pay-to-play barriers restricting the youth of Oakland from participation in soccer and developing to their highest level.

​Check out our website at www.oaklandsoccer.org and give us a follow on social media to see more club announcements including ways you can get involved as a player, coach, or volunteer.