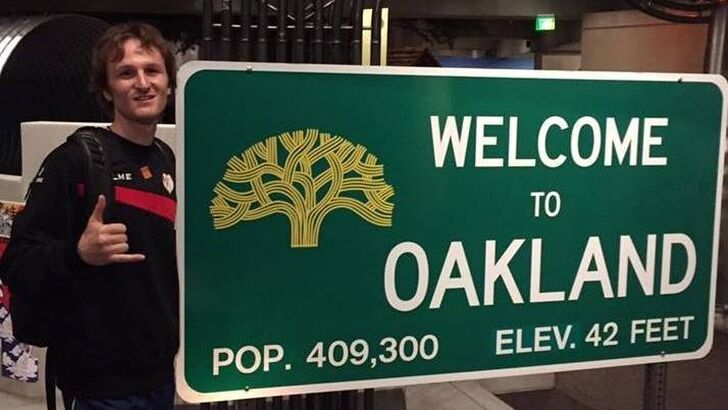 The Oakland Soccer Club Board of Directors is pleased to announce that we have unanimously approved the appointment of Benno Nagel as Oakland Soccer Club Technical Director, effective immediately. An Oakland native, Benno joins our OSC family as our club rebuilds itself towards a broader vision for providing opportunities in sport, and life, within our Town.
Benno, the founder of Oakland Roots, holds a rich background across multiple levels of soccer in both the US and abroad. Prior to founding Roots, Benno served under now San Antonio FC head coach Alen Marcina at the NASL level with Rayo OKC, working with world cup veterans Georgios Samaras (Greece), Derek Boateng (Ghana), and former SJ Earthquakes standout Marvin Chavez (Honduras), among others. As a professional youth coach, Nagel worked with European soccer giants GNK Dinamo Zagreb of Croatia, who are ranked as a #6 academy in Europe by the European Club Association and also with FC Twente of the Netherlands, a dutch eredivisie club.   At the collegiate level, Nagel worked with Oakland based Holy Names University, helping them transition from the NAIA into the NCAA Division 2 level while recruiting future Roots players Yohannes Harisch and Kevin Gonzales. Nagel was also the youngest tenured Assistant Director of Coaching/Head coach in the US Soccer Development Academy (at age 26) while with California Odyssey; a two time USSDA national runner up. Aside from coaching, Nagel earned his BA from SFSU and his MPA, with an emphasis in Public Policy Development, from CSU East Bay while working to pioneer exercise referral schemes in community based settings and utilizing soccer, and sport, as a force for driving positive outcomes for youth in both unincorporated Alameda and San Mateo Counties.

Oakland Soccer Club co-presidents Edward Stephen and Iliana Rivera Ramos had this to say on Nagel’s appointment, “Benno has a wealth of expertise and experience that can really lift our club to achieve great things” said Stephen, “his background across numerous levels of soccer both in our country and overseas makes him the perfect fit for our club as we forge a new path forward in Oakland”. Echoing Stephen's sentiment, OSC co-president Illiana Rivera Ramos added, “I’m really excited Benno has joined our team.  It’s exhilarating to have him help us lead the way in building our vision. In Benno, we have someone who can help us take better power in shaping a new model for community based soccer, hopefully helping us overcome the challenges that a pay to play system has left for clubs like us who can’t afford the costs associated with youth sports in today’s America.”
In joining OSC, Nagel had this to say on his appointment, “As an Oakland native, I am humbled to be able to play but a small part in an authentic and real community based project in Oakland. OSC serves as a perfect example of the failings of a sporting system existing within our country which is designed to exclude those who can’t afford the price of admission. Too many Oakland youth have been left behind in soccer despite having more talent than children of more affluent households who can better cover the costs of “pay to play”.  As our community continues to navigate a rapid rate of development and gentrification from outside peoples and interests, it becomes imperative that local people commit themselves to supporting local causes. OSC has served this community for 40 years and I am excited to help them continue to grow soccer in the Town.”
​
About Oakland Soccer Club:
Oakland Soccer Club provides affordable, high-quality opportunities for underserved youth in Oakland to develop skills for soccer, school and life.  Our goal is to remove the Pay-to-Play barriers restricting the youth of Oakland from participation in soccer and developing to their highest level.
Check out our website at www.oaklandsoccer.org as give us a follow on social media while staying tuned for more exciting club announcements to come as we head into 2021 and beyond!